Andy Parsons has shown widely in London, Amsterdam, Dublin and Tokyo. His work includes painting drawing printmaking sculpture and artists books. Exhibitions have included the Jerwood Drawing Prize and solo shows at the Castlefield Gallery in Manchester and the Standpoint Gallery in London.

He has been involved in a number of projects which have been devised to engage directly with the public. This has led him to work in a number of areas, as a facilitator, lecturer, critic and curator.

He recently completed a Per Cent for Art project in Sligo called Play Spaces, which was a public art project based on childrens engagement with outdoor spaces.

His recent work as a facilitator and curator of the Floating World Artists Books publishing project has been specifically focused on democratizing the production and consumption of contemporary art. Floating World initially concentrated on making books, (works are in the Tate Collection, British Museum), while working with artists in the UK, Ireland and Japan. Recent projects have concentrated on using books to achieve greater engagement with the wider public.

Parsons recently completed ‘The Andy Parsons Project’ in Sligo, where members of the public were invited to sit for portraits, and in return they received a large print of the painting. To facilitate this activity, he set up a studio in a vacant town centre Pharmacy, which was also used to display all the portraits in an open studio weekend. The interaction with the public became part of the artwork, as did the signage he used and the design of the final exhibition, which filled the Pharmacy building.

Recent work has taken its inspiration from the landscape of the west coast of Ireland. In landscapes where figures are conspicuous by their absence, rocks, trees, telegraph poles assume greater than usual importance. The simplicity of the pictures and the solitude of the scenes allude to German romantic painting as well as the work of Irish artists such Yeats. The latest works have all been created outside, in the manner of 19th Century Plein Air painting. The works have been produced in extreme conditions, snow, rain and violent winter storms. Andy has chosen this new approach as a conscious attempt to challenge the hegemony of the photographic image. 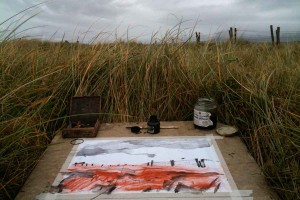 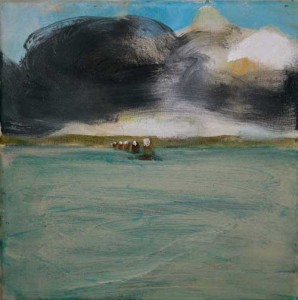